The timescales in which star-forming galaxies deplete their gas is found to be short relative to the age of the Universe. This points to the conclusion that galaxies must have a way to replenish their gas reservoirs and indeed, early cosmological simulations reveal cold gas being channeled along dark matter filaments. At the same time, galaxies lose a significant amount of their baryons due to feedback processes caused by starbursts, supernova explosions, or active galactic nuclei (AGN). This produces an intergalactic tug-of-war on cosmic scales, and with cosmic consequences, as inflowing gas competes with consumption for star-formation and galactic winds. The behaviour of gas in galaxy groups becomes even harder to track as interactions between galaxies result in tidal stripping and extragalactic clouds – the game of tug-of-war has now moved to extragalactic scales.

The Australian Square Kilometre Array Pathfinder (ASKAP) radio telescope has opened a new window for the detection and study of neutral hydrogen, a key ingredient for star formation, in distant galaxies through absorption-line measurements of the redshifted 21-cm H I line. The First Large Absorption Survey in H I (FLASH) takes advantage of the RFI-quiet environment, 30 deg2 field-of-view and wide bandwidth of ASKAP to search for the 21-cm HI line in absorption at all redshifts between 0.4 < z < 1.0 simultaneously. During the commissioning stages of the telescope, an H I absorption line at zabs=0.4503 was detected towards quasar PKS 1610-771 (at a redshift of 1.71). Earlier imaging of the QSO and surroundings revealed 4 objects surrounding the QSO (Courbin et al. 1997), but it remained unclear which of these objects are responsible for the H I absorption without further imaging and spectroscopy.

The Multi-Unit Spectroscopic Explorer (MUSE) on ESO’s Very Large Telescope (VLT) is a powerful integral-field spectrograph (IFS). IFS combines imaging and spectroscopy, gathering spatially-resolved spectra over a two-dimensional field. The result is a datacube with two spatial dimensions (Right Ascension and Declination) and a third wavelength axis. It can be viewed as a series of images at varying wavelengths, or as a spectrum for each pixel in the field (spaxel). With such a wealth of data provided by the cube, there is a corresponding need for high performance computing to process the data. The raw data files are hundreds of GBs in size and combining the multiple exposures of an observation requires more than 100 GB of RAM! 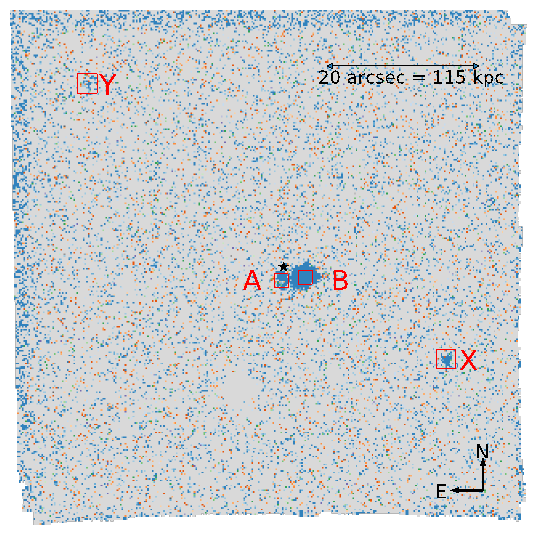 Figure 1: MUSE continuum-subtracted narrow-band image with width 1000 km/s in the [O II] doublet at z_abs=0.4503. Galaxies associated with the H I 21-cm absorber have been marked in red, and the centre of quasar PKS 1610-771 by a black star. In addition to objects A and B, we find two galaxies (labelled X and Y) with projected distances more than 150 kpc from the absorber. The position of the group members is reminiscent of a filamentary structure stretching from galaxy Y in the northeast, to galaxy X in the southwest.

Our VLT/MUSE cube with its 1 arcmin2 field-of-view (corresponding to ~350 kpc x 350 kpc at zabs=0.4503) allows us to detect galaxies associated with the H I absorption and probe their properties such as the star formation rate (SFR) and ionized gas kinematics. In total, we detect four galaxies A, B, X and Y within 1000 km/s of the H I absorber and they have impact parameters of 9, 18, 136 and 190 kpc respectively (Fig. 1 above). In a map of the gas kinematics (Fig. 2 below), we find that the 21-cm absorber is blueshifted relative to nearby galaxies A and B, and has the opposite sign to the ionized velocity field of galaxy B. This suggests it is not tracing a rotating disk, but potentially outflowing or extragalactic clouds of gas formed by interactions between galaxies A and B which are located only 17 kpc apart. The combination of ASKAP and MUSE data allows us to probe the intricacies of gas behaviour at a largely unexplored redshift. Our full analysis of this system can be found in the paper recently submitted for publication in the Monthly Notices of the Royal Astronomical Society. With hundreds of cold gas detections expected in the full FLASH survey, many of these fascinating systems are waiting to be explored. 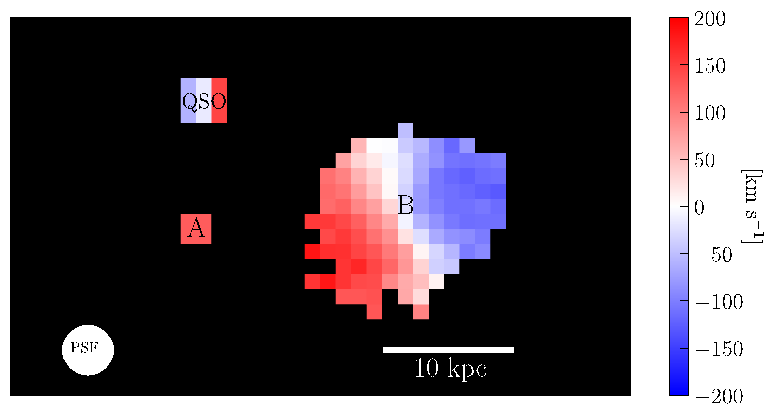 Figure 2: Kinematic map of the ionised gas in galaxy B, with zero velocity at its systemic redshift. At the position of the QSO PKS 1610-771, the three vertical stripes correspond to the neutral gas velocities along the quasar sightline. The blue and white stripes reflect the velocities of the two H I components measured with ASKAP, while the red stripe is from Voigt profile fitting of the Ca II and Na I doublets from MUSE. The position of galaxy A is marked with a single velocity corresponding to its systemic redshift. While the velocity of metal ions Ca II and Na I are consistent with the rotating disk of galaxy B, the H I gas detected by ASKAP must arise from a different phenomenon such as outflows or extragalactic clouds.
PrevNext
1 Response