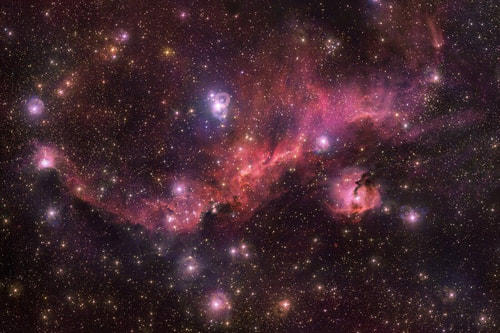 This is a hopefully thorough update from your ESO Users Committee (UC) representative. My role is to represent Australian ESO Users and act as a capillary link between ESO and the Australian community.

ESO success and next call for proposals
Congratulations to all those who were successful at securing ESO time in P104 and recently completed their Phase 2! While Australia’s success rate has been good this round (including our first successful large program allocation), the number of proposals has been decreasing slowly over time. The bottom line is that if we put more proposals in or ask for more time, the stats indicate that we will get more out of our ESO partnership! It is never too early to start thinking about a good angle for the next proposal round. So please consider how ESO data could enhance your scientific portfolio.

ESO UC43
The ESO Users Committee met on 29-30 April this year. You may find the agenda and certain files here (although not all of them are publicly available). The recommendations have just been made public, so I am now free to update everyone on the proceedings of the meeting. ESO’s response to last year’s UC recommendations is unfortunately not public, but we were pleased to see that all recommendations had been considered and most had been acted upon. For those that were not acted upon, ESO discussed possible ways forward. For this year, the UC reported a generally high level of satisfaction from ESO users on nearly all fronts. A slight improvement in user satisfaction with software tools has been noted by ESO, thanks to significant software development efforts in the past year or two. ESO also announced a new web-based phase 1 tool! Although this is still under development, all ESO tools are being integrated so that phase 1, phase 2, the exposure time calculator and finding chart tools can work together for a relatively breezy user experience. The release of the tools was expedited (without full integration) following last year’s recommendation. My experience and the above show that ESO cares and proactively acts upon user feedback.

Nando Patat presented the outcome of the distributed peer review process experiment for which some of you may have volunteered in P103. His findings will be published in a forthcoming Messenger article, so stay tuned. One interesting result is that the distributed peer-review process is at least as good as the Observing Programme Committee (OPC, ie ESO’s TAC) process. One take-home message I personally got out of this representation is that while rankings generally agreed between the pre-OPC grades and distributed peer-review ranking, in-person meetings tended to change the outcome in a measurable way. The following is my personal observation/opinion and does not reflect ESO’s point of view: I was left wondering whether in-person meetings may be counter-productive (and needlessly expensive) if they can sway the outcome in this way (assuming the pre-ranking and pre-OPC grades were “more correct” by virtue of their agreement), but this is hard to determine as ranking proposals is an inherently subjective process.

The special topic this year was on ESO public surveys. The UC heard from 2 expert public survey users (David Sobral and Sara Lucatello) on their experience using ESO phase III products (high level data products provided by other ESO Users/PIs) and public survey data. Both emphasised the need for high level Phase 3 data products to hit the archive in a timely fashion to maximise impact. This is entirely dependent on the survey teams and ESO has little leverage to ensure timely release of such data products.

Miscellaneous
The 2018 ESO annual report is now out for your reading pleasure.

Tayyaba Zafar (AAO/Macquarie), Carlos De Breuck (ESO) and Magda Arnaboldi (ESO) have published a report on the first Australia-ESO conference. A particular highlight is how blind abstract ranking by the SOC naturally led to a well-balanced gender and seniority presenters’ distributions.

If you experience technical issues using ESO data/facilities, the best place to get help is by emailing the ESO User Support Department.

Many thanks to those who are serving, served or agreed to be nominated for the OPC.  You may nominate someone or self-nominate at any time by contacting me directly. ESO requests that OPC nominees be on their 2nd postdoc or beyond. The ESO OPC nomination system requires me to include the OPC subcategories in the nomination. In addition, I may also include the nominee’s experience on ESO telescopes and the year of their PhD. As usual, if you have been nominated in the past, but haven’t been contacted by ESO yet, your name will stay in the system for a total of 4 periods (2 years), feel free to re-nominate yourself if that time has lapsed.

Finally, if you haven’t already done so, don’t forget to sign up for the ESO science newsletter.