Galaxies in our present-day Universe form stars much less rapidly than they did in the past. Most of the stars in nearby massive galaxies formed during the ‘peak epoch of star formation’ – a period of cosmic history that occurred approximately 8-11 billion years ago, at redshift z≈1-3. Therefore, to understand how massive galaxies in the nearby Universe were assembled, it is necessary to study the properties of star-forming regions – the birth places of stars – in distant galaxies.

Emission-line surveys of hundreds of galaxies at z≈1-3 have revealed that their star-forming regions have much more extreme properties than those in the local Universe. Measurements of the [SII]6716/[SII]6731 emission line ratio suggest that star-forming regions at z≈1-3 typically have ~5–10 times larger electron densities than their local (z≈0) counterparts. However, this difference disappears when comparing galaxies that have the same star-formation rates, suggesting that the observed evolution in the internal properties of star-forming regions is intrinsically linked to the evolution in galaxy-integrated star-formation rates, despite the factor of 1000 separation in spatial scales.

Various mechanisms have been proposed to explain this connection. The molecular hydrogen density governs the rate of star-formation and may also set the electron density. Alternatively, the thermal pressure in star-forming regions may be governed by stellar feedback (supernova explosions and stellar winds), or by the downward gravitational pressure from stars and gas in galaxy disks. However, prior to our new study (Davies et al. 2021) these hypotheses had not been tested against observational data. The enhanced electron densities measured in the spectra of z≈1-3 galaxies could also plausibly be the result of contamination from gas that has been compressed as it is entrained in outflows. Outflows are more common and energetic in galaxies with higher star-formation rates, and therefore it is necessary to exclude galaxies with outflows in order to obtain clean measurements of the electron densities in star-forming regions across cosmic time.

We performed a detailed analysis of the physical mechanisms governing electron densities using a sample of 611 galaxies from two large integral field surveys – the SAMI Galaxy Survey, a survey of 3000 nearby galaxies (z <= 0.1) conducted using SAMI on the AAT (Croom et al. 2021), and KMOS3D, a survey of 740 galaxies at the peak epoch of star formation (0.6 < z < 2.7) conducted using KMOS on the VLT (Wisnioski et al. 2019). We extracted  an integrated spectrum from each integral field datacube after shifting all the spectra to the same systemic velocity to maximize the chance of detecting weak broad and/or blueshifted emission line components associated with outflows.

We selected galaxies with typical star-formation rates for their stellar mass and redshift, and without evidence of contamination from outflows, shock excitation, or accretion onto supermassive black holes. We split the galaxies into 4 redshift bins, stacked (averaged) the spectra of all galaxies in each bin, and computed the average electron density in each bin by measuring the [SII]6716/[SII]6731 ratio in the stacked spectrum (Fig. 1). The galaxy-integrated star-formation rates were measured from the extinction-correction Hα fluxes.

Our results confirm previous findings that the typical electron density in star-forming regions has decreased by a factor of 6-10 over the last 10 billion years (Fig. 2). Our sample excludes galaxies with outflows, indicating that contamination from compressed gas in outflows is unlikely to be the primary driver of the observed electron density evolution.

The most innovative aspect of our study is that we investigate which (if any) of the hypotheses described above are able to quantitatively reproduce the observed correlations between electron densities and galaxy-integrated star-formation rates. We find that the thermal pressure in star-forming regions evolves much more slowly than both the gravitational pressure and the rate of pressure injection by stellar feedback, indicating that neither of these mechanisms can fully explain the observed electron density evolution. On the other hand, we show that the electron density is approximately equal to the molecular hydrogen density at all redshifts. This suggests that the observed link between the electron densities in star-forming regions and the total star-formation rates of their host galaxies may arise because both quantities are governed by the properties of molecular clouds. However, the molecular gas densities used in our study were estimated using empirical scaling relations that are a function of galaxy stellar mass and redshift, and to obtain more conclusive results, this hypothesis needs to be tested using a sample of galaxies for which both ionized gas and molecular gas observations are available. 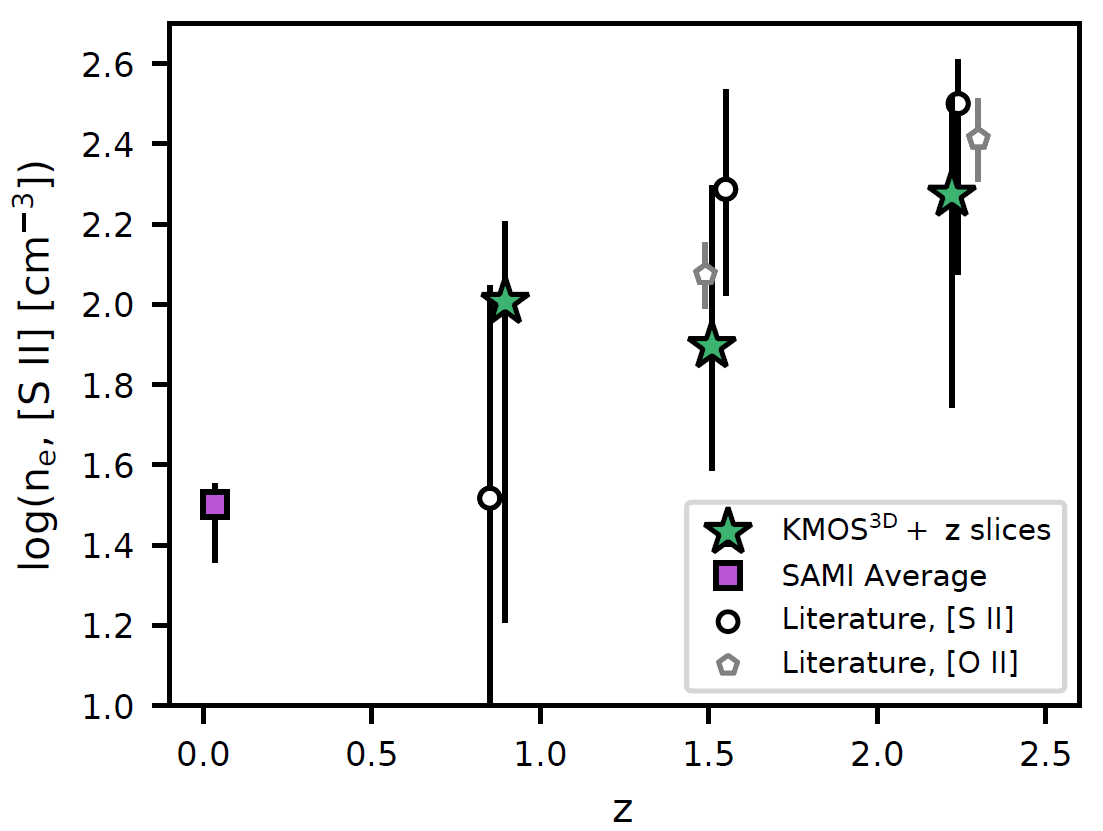 Fig. 2: The redshift evolution of the [S II]-derived electron density based on the combination of the KMOS3D, SAMI, and high-z literature samples.