Lithium is the heaviest element produced in Big Bang nucleosynthesis (BBN). As such, it is a unique element that can be used to study the conditions of the Big Bang. Standard BBN theory produced mostly hydrogen and helium, with trace amounts of lithium – about 1 in 10 billion. That lithium is mainly in the form of its heavy isotope, 7Li, with only trace amounts of 6Li (6Li/7Li = 10^-5). Observationally, there have been measurements of Li in old metal-poor dwarf stars in the halo of the Milky Way. These stars have been found to have a similar 7Li abundance over a wide range of metallicities, known as the “Spite plateau”, and have been thought therefore to reflect the BBN 7Li abundance. It would be great if observations and theory agreed; however, the observed Spite plateau is a factor of 3 lower than the BBN-predicted 7Li abundance. This disagreement is known as the cosmological lithium problem. To confuse the issue even more, 6Li has also been detected in the same stars at a few percent of 7Li, which exceeds predictions from standard BBN by several orders of magnitude. This even larger disagreement is known as the second cosmological lithium problem.

There are a few possible solutions to the cosmological lithium problems. Stellar evolution could alter the Li present in these old stars over their lifetime. However, for stellar evolution to be the only solution, this would mean 7Li must be depleted, whilst 6Li is produced in the same star. This is challenging as 7Li and 6Li have similar nuclear properties, so any method depleting 7Li must also deplete 6Li. Therefore, solutions to the cosmological lithium problem appear to make the second cosmological lithium problem worse. In addition, there are some other theories involving nuclear physics, including non-standard Big Bang models, modified nuclear reaction rates, and potential unknown fundamental particles. The simplest solution is that perhaps these observations of 6Li in metal-poor stars are inaccurate? We investigated this problem by revisiting these old stars. 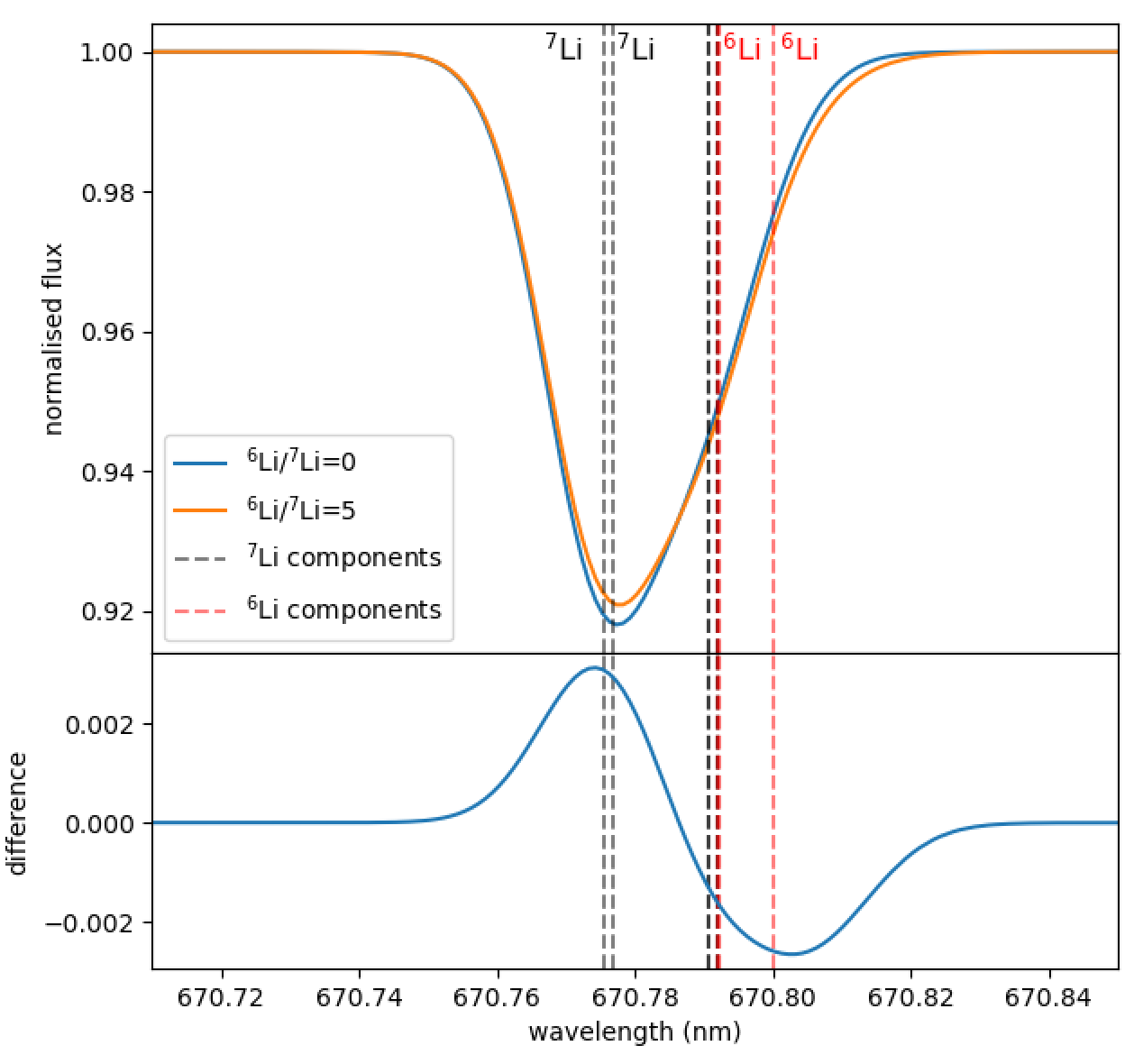 Fig. 1: Synthetic spectra for 6Li/7Li = 0% (blue) and 6Li/7Li = 5% (orange). The 7Li (black) and 6Li (red) components are shown with dotted lines. The difference between these two spectra is shown in the bottom panel. Typical measurements of 6Li/7Li in old metal-poor stars are <5%.

Measuring Li6 in stars is challenging, requiring high resolution, high signal-to-noise (S/N) spectra, and wavelength stability. The ESO/VLT ultra-stable high-resolution spectrograph ESPRESSO is perfect to carry out the high quality observations required. The Li 670.8 nm line is famously asymmetric due to both fine structure splitting on 7Li, and an almost equal in strength 6Li signature in the red wing of the line. It is this asymmetry that we are measuring when we measure the 6Li/7Li ratio in a star (see Fig. 1 above). This signature is confused by stellar rotation, which broadens the line; stellar velocity, which shifts the line; and the overall Li abundance, which makes the line stronger. These effects are all partially degenerate with each other and this, combined with the weak signal of the 6Li component, makes measuring 6Li/7Li particularly challenging, requiring the use of a high precision and S/N spectrum. It is possible to break this degeneracy by measuring stellar rotation and velocity using other lines as these are characteristics of the star and should not depend on the line being measured. To do this, we need a wavelength stable spectrograph and so used ESPRESSO to observe three stars over a total of 29.5 hours, with high resolution of R > 140000, and high S/N > 2000.

We measured 6Li/7Li in three old metal-poor dwarf halo stars using updated three-dimensional hydrodynamic model atmospheres, atomic data for the radiative transfer calculations, and pristine observations from ESPRESSO. Fig. 2 below shows the fitted synthetic spectra to the ESPRESSO observed spectra. We do not detect 6Li in our measurements, and instead provide tight upper limits more closely matched to Galactic chemical evolution. The non-detection of 6Li results in a trivial solution to the second cosmological lithium problem: it never existed!

For more details, you can view our recent paper on arXiv or in MNRAS.

Fig. 2: Fitted ESPRESSO observed spectra for our three target stars (top) with residuals (bottom). Black crosses are the observations plotted with error bars, blue line is the fitted synthetic spectrum, and the orange shaded region is the 95th percentile. Such small residuals are unprecedented for ancient halo stars like these.
PrevNext