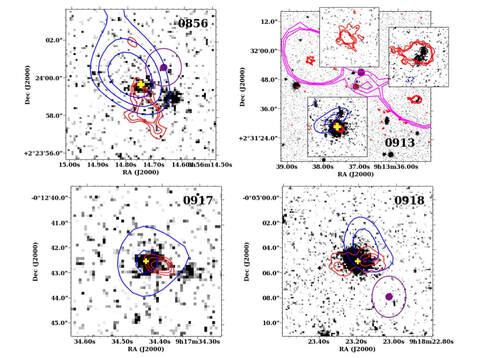 Finding the first active supermassive black holes is one of the most exciting and yet challenging problems of extragalactic astronomy. These black holes are very rare, but they emit a considerable amount of light from their accretion disc and their very powerful radio jets. As such, they are amongst the brightest phenomena in the Universe. Finding them is of prime importance to understand their formation and evolution, but given their intrinsic rarity and distance, this becomes a needle-in-a-haystack problem. How can we most efficiently reveal those hidden monsters among the multitude of sources in the sky?

Historically, high-redshift radio galaxies (harbouring active supermassive black holes) were selected from their radio flux and spectral steepness. The record of the most distant source using this technique was at z=5.12 established in 1999 (van Breugel et al. 1999). Progress to discover more distant sources has been slow due to the lack of deep and wide low-frequency radio surveys. With the advent of the new generation of radio interferometers such as MWA, GMRT and LOFAR, a new breed of all-sky surveys is now available to break this record. Recently, Saxena et al. (2018) pushed the limit to z=5.7. They made use of the TGSS to select steep sources at 150 MHz and follow them up with optical spectroscopy. For our project, we instead used the GLEAM survey with the MWA and take advantage of the superb frequency coverage (20 datapoints from 70-230 MHz) to calculate both the steepness and the curvature of the sources. We isolated a few thousand candidates. In order to derive a figure of merit of our new selection technique, we focused on the GAMA 09 field where a lot of supporting multi-wavelength data are available. After further selection and visual inspection, we finally isolated four candidates not detected in the near-IR, indicating very distant sources (marked in red in the figure below, from Drouart et al. 2020). 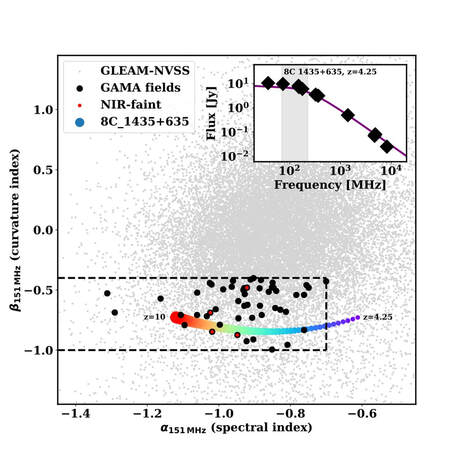 However, one problem arises: given the intrinsic faintness and distance of our sources, optical/near-IR spectroscopy is either impossible, or demands a considerable amount of integration time even on 8m-class telescopes. We therefore developed a new observing strategy consisting of obtaining a deep near-IR image with HAWK-I on the VLT to confirm the host position, and a spectral scan in the 84-115 GHz range with ALMA to confirm the redshift via molecular lines with a resolution matching the near-IR image – see the figure at the top of this article, showing ALMA continuum in red contours, and ALMA line emission in blue contours, overlaid on VLT/HAWK-I K-band images.
Indeed, carbon monoxide (CO) is a molecule with some of the brightest lines in extragalactic sources with very well constrained emission frequencies. In our case, any source located at z>2, will present at least two CO transition lines in their observed spectra (84-115 GHz), therefore providing us with a unique redshift solution. Thanks to this technique, we have already confirmed a new radio galaxy (0856 – see CO spectrum below) at z=5.55, further than the old distance record! Another source still eludes us, 0917, but in all likelihood is at z>5 as it appears fainter in radio and near-IR than 0856. Further investigations are in progress. Moreover, our z=5.55 source is presenting very similar properties to previously observed radio galaxies at z>4 both in term of radio and near-IR luminosities, implying similar mass for the supermassive black hole, the host galaxy and molecular gas reservoir.

Given the success of our technique (2 out of 4 sources at z>5!), we are now expanding our research to a wider part of the sky with an improved selection and have a new, 20x larger candidate sample ready to be observed with ALMA and the VLT. Assuming the same success rate, we will have access to a statistically significant sample of powerful radio galaxies in the epoch of reionisation! On top of enabling systematic studies of the supermassive black holes and their host galaxies, it will provide us with very strong radio sources to perform HI absorption observations against, and start to conduct tomography of the inter-galactic medium in this widely uncharted era of the Universe (a domain exclusively reserved to bright optical quasars and Lyman forest studies so far).