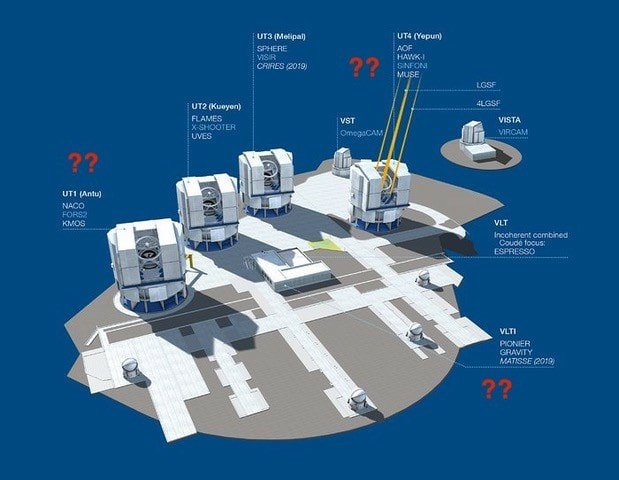 Between June 17 and 21 this year, an exciting, rare and strategic meeting will take place in Garching on The VLT in 2030. The existing complement of VLT/I instrumentation was largely defined a decade or more ago, with no new instruments approved in the past 5 years. The long term future of the observatory is uncertain, with a range of possible changes to instrumentation and operations.
These could include:

This meeting is likely to be the only opportunity for broad community input into the future of VLT/I during the current term of Australia’s strategic partnership with ESO. In order to summarise the current situation, here is some key background information:

Scientific Context
A significant part of this conference will be devoted to defining the scientific context of Paranal. Although split into scientific areas, this will be in the context of answerable questions with other facilities. Time domain astronomy is expected to substantially grow with LSST,  the rich data sets from space survey instruments (e.g. Gaia, WFIRST, PLATO) will significantly change the focus of many observational astronomers, and the premier follow-up instruments are likely to be the ELT and JWST.

Known Instrument Changes
The following known changes to Paranal will occur well before the era being discussed at this meeting.

Ageing Instrumentation
Towards the end of the next decade, instruments more than 15 years old are not expected to keep operating without upgrades. This includes FORS2 (already part of upgrade plans now), UVES, KMOS and X-SHOOTER, plus PIONIER on the VLTI.

Obsolete Instrumentation
In the ERA of JWST and ELT, some Paranal instrumentation will arguably become obsolete for many science cases. This will include:

Under the assumption that these instruments are decommissioned without additional funds, this would leave 4 empty instrument slots on the UTs.

New Instruments
In the current Paranal Instrumentation Plan, there are 2-4 new instruments or significant upgrades (in addition to MAVIS) to be delivered before 2030, with an anticipated timescale of 8 years for a new instrument between a call for Phase A studies and Preliminary Acceptance Chile.  In the existing Paranal Instrumentation Plan, a Cassegrain UV spectrograph, a UVES upgrade and a SPHERE upgrade all have some clear justification. This would leave room for only ~1 new instrument in the Paranal budget (on VLT or VLTI), plus 2 visitor instrument slots each on the VLT and VLTI. Are Australian astronomers content with this status quo? Leave us your comments below.