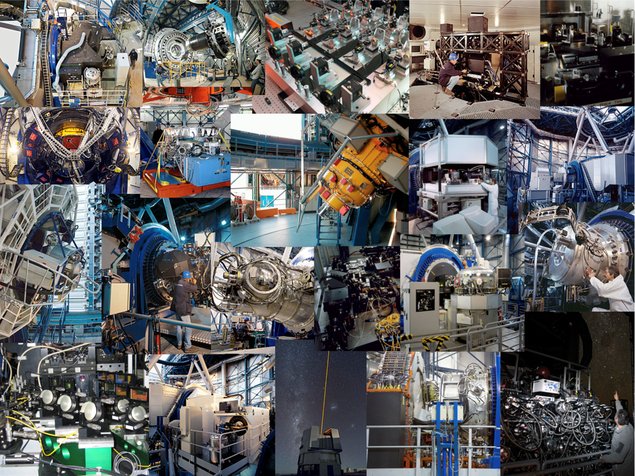 ESO’s VLT in 2030 workshop in June provided a unique opportunity for the broad ESO community to prevent their vision for the world’s most productive observatory in a broad scientific context. Big picture context talks ranged from the solar system (Heike Rauer) through to Cosmology (Matthew Colless), with arguably the most relevance, interest and excitement in the areas of exoplanet formation, resolving stellar populations in galaxies including the Milky Way, and extragalactic astrophysics including AGN feedback.

The landscape in 2030 was presented as one moderately different to today: in particular, with data from JWST and the ELT(s), single 8m telescopes will no longer be competitive for high sensitivity, high angular resolution science in the near and mid-infrared wavelength ranges. The ESO Director General, Xavier Barcons, emphasised the requirement to fit within a constrained budgetary envelope in the coming decade, clearly stating that there will be no call for “3rd generation” VLT and VLTI instruments, and that ESO will not be able to support all concepts presented in the 10 year timeframe.

However, it became rapidly clear that the VLT/I would remain diverse and relevant well beyond 2030, with most instrument concepts still being scientifically compelling even if significantly delayed due to the funding environment. ESO will become the premier visible and near ultraviolet light observatory, especially as Hubble reaches the end of its life. In spite of the colossal size of the ELT, the highest angular resolution instrument in the southern hemisphere will remain the VLTI, with potential for an immense 1000 fold increase in sensitivity.

SPHERE+: Upgrades to SPHERE, especially a pyramid wavefront sensor in order to greatly improve sensitivity near the diffraction limit. SPHERE’s Shack-Hartmann wavefront sensor gives exquisite contrast at 1 arcsec separations, but loses more than a factor of 10 in sensitivity at close separations. Sensitivity at close separations is essential for detecting and characterising planets detected with RV and Gaia astrometry. SPHERE+ clearly becomes obsolete at infrared wavelengths (but not visible wavelengths) when the first extreme-AO system for an ELT comes online; however the technology for this hasn’t yet been developed, and such an instrument is at least 10 years away (and more likely 15) so there is a significant window for SPHERE+ to be competitive if funded. Although the upgrades may be possible without SPHERE leaving Paranal, hardware costs are still in the 3.3. to 4.8 MEuro range.

Blue-MUSE. Just like the (very successful) MUSE, but without adaptive optics, and at blue and near ultraviolet wavelengths. Such an instrument would have broad community support, as many people like to use MUSE and would prefer shorter wavelengths. However, it could be seen as incremental in the international context of MUSE, MAVIS (better for most science cases on point sources) and KCWI (which is not so much smaller than Blue-MUSE in the modes around R~1000). For some science, it is designed to be 10 times faster than KCWI. The estimated hardware cost is 10 MEuro.

GRAVITY+. This is mostly LGSAO for all 4 UTs, providing a vastly improved sky coverage and sensitivity (~1000 times) for GRAVITY. Primary scientific goals are supermassive BH masses, mostly at redshift ~2 but also out to ~7, and also detecting binary SMBH in the last parsec. The instrument would have many secondary science goals, including measuring stellar mass BH frequency; exoplanet frequency near the snow line to Neptune masses via resolved microlensing; imaging of the youngest, embedded disks and forming stars. Upgraded AO enables other visitor instruments (e.g. with Stellar/Galactic archaeology focus). The proposal is designed to be phased, with the two major phases at 6 MEuro hardware each. Some of the GRAVITY+ science could be done with a significantly larger amount of time on the ELT, but some is unique in the foreseeable future of several decades.

Many other less ambitious instruments were presented. My collaborators and I presented a linked suite of visitor instruments for VLTI, called Asgard that could work beside or with GRAVITY+ and could, for example, detect forming exoplanets more effectively than the ELT. This suite consists of Heimdallr, BIFROST and VIKiNG – rather than blowing my own horn, see my slides, as well as ideas for 4-5 other interesting concepts.

Mark Casali presented a concept for creating a wide-field VLT feeding a highly multiplexed spectroscopic instrument. Including instrumentation and staff costs, this was around the $200M AUD level for construction during the 2030s. This was clearly outside the primary scope of the meeting. However, he made a clear case for the need to study such ambitious projects well in advance of funding, with the ESO community partners needing some long term strategic vision in order to be able to invest time and resources into these kinds of visionary projects.