Fast Radio Bursts (FRBs) are now showing their potential as a cosmological tool. The bursts were initially discovered with single dish radio telescopes like Murriyang (the 64-m Parkes Radio Telescope), as dispersed pulses of radio emission. The dispersion (longer wavelengths of radio waves arriving slightly later than shorter wavelengths) is caused by the column of electrons between the burst source and us. In the case of FRBs, the total column density is far higher than would be expected from the Milky Way. As the space between galaxies is much emptier than within one, the implied distances to FRBs are large: the bursts could be coming from sources with redshifts greater than 1. If this was the case, FRBs would be exciting for two reasons. Firstly, the implied luminosity of the bursts would be a trillion times greater than the most similar known source class (Milky Way pulsars).  Secondly, the bursts could be used to study the diffuse cosmic web of matter between galaxies that is extremely faint and difficult to observe at other wavelengths.

However, the distance to FRBs first needed to be confirmed. Telescopes like Murriyang have insufficient precision to pinpoint the burst to a source (a star, a galaxy, or something else), making it fraught to determine what causes them. To do so would require us to detect bursts with a radio interferometer, which has longer baselines (separations) between antennas and can uniquely identify the source of FRBs if (as in a few cases) they exhibit repeat bursts. However interferometers typically have a field of view smaller than that of Murriyang (approximately 0.6 square degrees) so the odds of catching a new FRB at random are quite low. That was until the advent of the Australian Square Kilometer Array Pathfinder (ASKAP), with its novel phased array feeds offering a 30 square degree field of view. 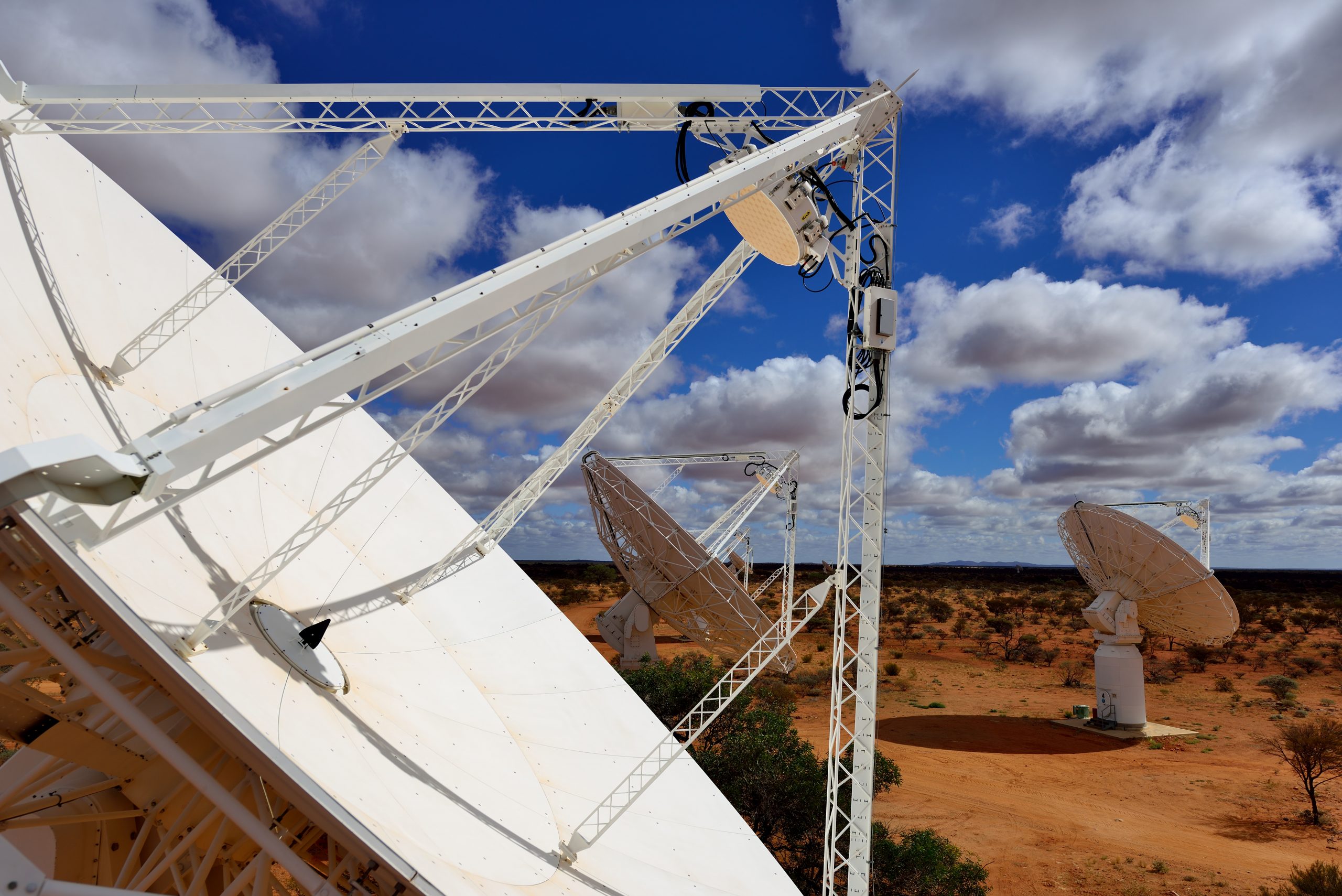 Close-up of one of the ASKAP antennas, showing a phased array feed at the dish focus. Image credit: CSIRO.

Since 2018, my team has been using ASKAP to find and localise FRBs as part of the Commensal Real time ASKAP Fast Transient (CRAFT) survey science project. We are able to search for bursts in real time, and within a fraction of a second collect the data required to make an image of the FRB and pinpoint the burst location.

With positions in hand, we have used optical facilities such as the ESO Very Large Telescope to identify and characterise FRB host galaxies (such as the host of FRB 20190608 shown below), and importantly measure burst distances from the host galaxy’s redshift. We have confirmed that most bursts originate at cosmological distances. We have also shown that FRBs can be used to trace the intergalactic medium with burst dispersion related to redshift (named the Macquart Relation in honour of this fundamental contribution of our late colleague Jean-Pierre Macquart), detecting for the first time the entirety of the baryonic content of the local universe.

For every question one solves, a myriad of new questions are raised. This is definitely the case for FRBs.  For example we still do not know what causes FRBs. Is there more than one type of engine that produces FRBs? Are there differences between the sources that repeat and those that do not?  Similarly, while we have made the first crude measurement of the intergalactic medium (IGM) with FRBs, we now have the opportunity to study the IGM in more detail. Can we use them to map the cosmic web? How else can they be used as cosmological tools?

To answer these major questions, it is necessary to detect a larger sample of bursts over a wider redshift range. We are commissioning an upgraded FRB detection system for ASKAP that we expect to detect FRBs at a rate 5-10 times greater than the current system and a factor of 5 improvement in sensitivity. This means that we should be able to detect a few FRBs per week! The increased sensitivity should allow us to discover bursts deeper into the Universe.

To complement these new searches, we need an equal optical/infrared effort. Enter the ESO Large Programme I lead, which our international team including Australian astronomers at Swinburne University, Curtin University, CSIRO,  Macquarie University, and the University of Sydney refers to as “FURBY” (I’ll leave it up to the readers to guess the acronym). We have been awarded a total of 179 hours over Periods 108-111 to follow up 50 ASKAP-localised FRBs. There are two main goals for the Large Programme. The first is to determine the cause of fast radio bursts through detailed and homogeneous studies of their host galaxies. The second is to expand their use as cosmological probes to explore the Macquart relationship.

As part of the program we will obtain deep optical and near-infrared images of the FRB fields with the FORS2 and HAWK-I instruments. This will allow us to identify with the highest confidence the host galaxy, and provide vital photometry for anchoring our stellar population analysis.  We will also use the X-shooter spectrograph to obtain broad band spectroscopy of the FRB host galaxies, which will yield the redshifts necessary for the IGM studies, and provide the detailed measurements of the chemical composition of the host galaxies. Our radio measurements provide not only the burst positions, but also enable us to study how the pulses are imprinted with properties of the intervening plasma (such as density, magnetisation and turbulence) from within the host, the IGM, the Milky Way, and any intervening galaxy if one happens to intersect the line of sight.

Our team is greatly benefiting from Australia’s access to the VLT under the Strategic Partnership. Follow-up of the FRB host galaxies found with ASKAP requires access to 8-m optical/infrared telescopes in the Southern hemisphere. The fleet of instrumentation at the VLT enables us to tackle the biggest questions in FRB science in one fell swoop. The project also demonstrates the complementarity of Australian radio and ESO optical/infrared facilities and the scientific gains that can be achieved by bringing them together. We are still near the beginnings of FRB science, and the start (I hope) of a series of Australian VLT Large Programmes. We are currently devising methods to use FRBs to measure the Hubble parameter, H0. Telescopes such as ASKAP and the VLT could play a role in resolving (or not) the current Hubble tension through such a programme. 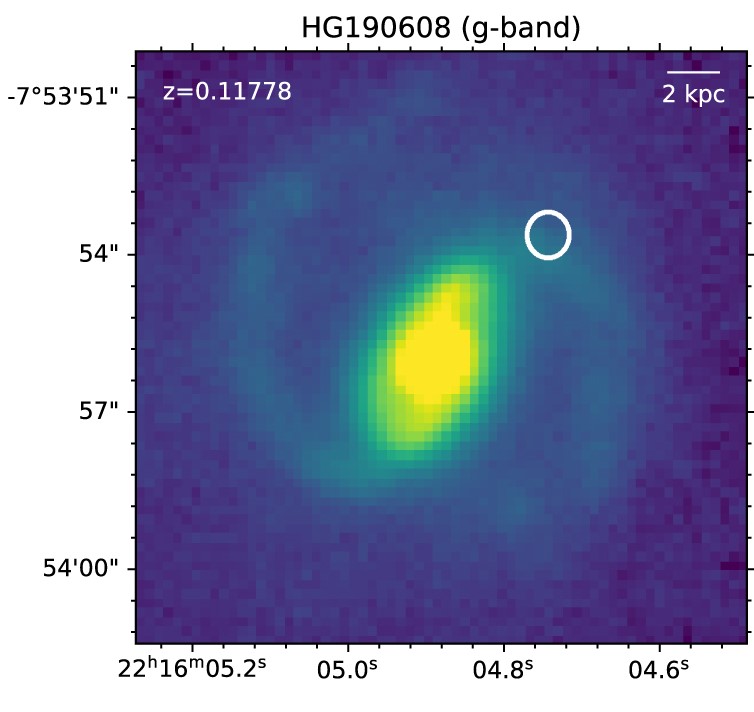 VLT FORS2 g-band image of the spiral galaxy that hosted FRB 20190608. Its location (marked with the white circle) near a spiral arm indicates a connection of the FRB with recent star formation. Image credit: Bhandari et al. 2020, ApJL, 895:L37
PrevNext